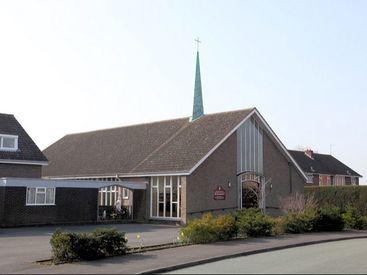 Before 1961, Wombourne was served by the priests from St Michael's parish in Penn and Mass was said in the British Legion Hall of Maypole Street. In the 1960's the area expanded mainly as a dormitory town for Wolverhampton and the Black Country. Fr John Drinkwater, parish priest at St Michael's, obtained a plot of land in Rennison Drive from a Catholic builder, William Whittingham, who erected the church at cost. Designed in a modern style by CV Mason of Mason & Richards, Wolverhampton, it is of brick and has a thin fibre glass spire. The church was opened in 1961 and soon after was given independence from St Michael's. In recent years, Fr David Duggan undertook a major reordering of the church when the new permanent altar, baptismal font, lectern, and Blessed Sacrament chapel were installed. The primary school was opened in 1969.