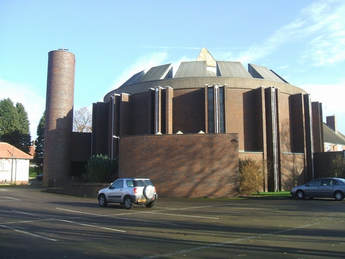 The first Mass in the newly-established parish of St Michael was celebrated in the Carmelite chapel in Penn Fields on the 7th of July 1923. In 1924, a site was purchased by Fr John Drinkwater, the first parish priest, who built a church hall which was opened on Pentecost Sunday 1927. That hall was to become the home of the parish priest until the building of the present church in 1968. The design of this church (Desmond Williams and Associates 1968) coincided with the changes in liturgy and planning after Vatican II. The basic idea was to envelop the sanctuary with the 650-strong congregation in a fan-shaped nave. The interior is indirectly lit by reversed clerestories plus artificial lighting which simulates the effect of natural lighting.

Materials are simple - brick, timber and plaster. Notable features include the narrow floor-to-ceiling windows by Bronwen Gorden of the Wolverhampton College of Art. The suspended crucifix is if resin bronze on white ash; the fine figures of the Madonna and Child (resin-copper) in the Lady Chapel and St. Michael (wrought bronze) on the outside wall are by Sean Crampton. The sculpture of the ascending Christ and a relief panel behind the high altar of the Cross and the Crown of Thorns are by Robert Brumby.